186 countries underpin the functioning of IFs and these countries can be displayed separately or as parts of larger groups that users can determine.

Below is a visual representation of how different entities are organized into Countries/Regions, Groups or Glists: 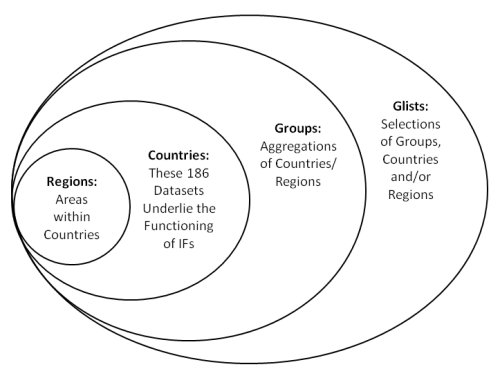 When using IFs, there are many occasions where the user is asked whether or not they would like to display their results as a product of single countries, or larger groups. This is typically a toggle switch that moves between Country/Region and Groups, however, it might be a three-way-toggle that includes Country/Region, Group and Glist.

Countries/Regions are currently the smallest geographical unit that users can represent. The ability to split countries down into smaller regions, or states, is under development. There are 186 different countries/regions that users can display.

Groups are variably organized geographically or by memberships in international institutions/regimes. You can find out who is represented in each group and add or delete members by exploring the Managing Regionalization function.

Glists merge both Groups and Countries/Regions. These lists are mostly geographically bound. In the future, the Glist distinction will become more important as some users may want to place, for example, both the Indian state of Kerala in a Glist with Sri Lanka and Nepal.

Users may also want to create their own groups or explore what countries are members of what groups.