Quarterly, we update the GDP series in IFs by using a special process that involves pulling data from the WB and the IMF. It is special as the GDP values we have in IFs are based on constant 2011 prices, whereas World Bank is based on constant 2010 prices. The IMF updates its forecasts in its World Economic Outlook publication in October and January (Full Release) and in April and July (revisions).

If one country has a different WB historical value, all countries must be updated. Why? (1) We do not necessarily know which country’s historical series was revised. (2) If we have a method to update one or do not know which changed, we update all anyway.

GDP is a key economic series in IFs, so it’s ESSENTIAL the puller and vet person do this process carefully and have a full understanding of the process. Thus, we document.

For this process, you will require three sources:

Use of the Three Sources:

* BE CAREFUL, IMF and WB have different country concordances! * 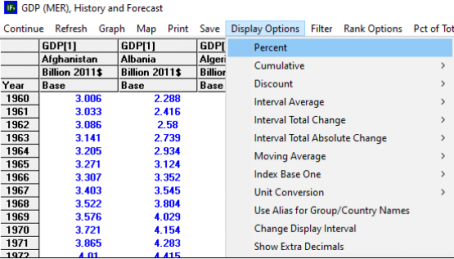 Let us first consider an example to assess our understanding:

We use the IMF projections for our country GDP forecast values (typically 5 years into the future). Why can we do this? Regardless, of the base year, the growth rate should not change. Why is that true? Think of the base year, as a year (or index) that we want to compare changes to. The level of that index shifts to a different comparison year, the rates of growth do not change.

Therefore, this whole process of updating GDP in IFs will work even if we change the base year. For example, if we switch to GDP at 2015’s constant price instead of 2011’s constant price, the first step of taking WB values would switch to taking 2015’s GDP current price for all countries as opposed to 2011’s.

You think you get it? Try Afghanistan first. Verify. If you get it right, great work! Apply that method to all. The final deliverable should be a series with a GDP value for every country in Constant 2011 price.

How would someone vet? (1) Replicating the procedure for a handful of random countries. If these random countries are right, they probably are all right. However, you want to pay special close attention to the forecasts of the big economy countries that are updated by the IMF twice a year as these are the most complicated calculations. Follow typical vetting checks. (2) Vetting new series against old historical series in IFs.

The project supervisor then updates all the scenario files.

We repeat this logic for 2011 PCPP GDP. Do not fear, however, as it’s easier. For this one, we get the 2011 values, then the growth rates, and use that to calculate the GDP values (constant 2011). There are no forecasts, as PCPP is not commonly forecasted.

Every two years, we update the population series in IFs by pulling data from the UN World Population Prospects. The UN updates this data biannually so we can expect to go through this process every two years.

As for all core series, every country must have a value for every year so it is important to check the data for any missing values before importing the series. Should you see missing data in any given year for any given country, you must find an alternative source to fill in the missing data. As of 2022, the UN has complete data for each country and year starting in 1950.

To find population data navigate to the UN World Population Prospects page. Locate the Data tab, then select Data Portal. This will bring you to the UN Population Division Data Portal where you can search for various population-related variables. For the Indicator select "Total Population by Sex", for Location select "Alphabetical" then click "select all" to check all countries. For the Data Range, we want all data available so select the earliest possible data (1950) to the current year. Once you have chosen all your parameters, click "Get Started and Search". This should generate the specified data in a table (see image below). To download the data, select "Export" and "Excel 2007+ (.xlsx)". 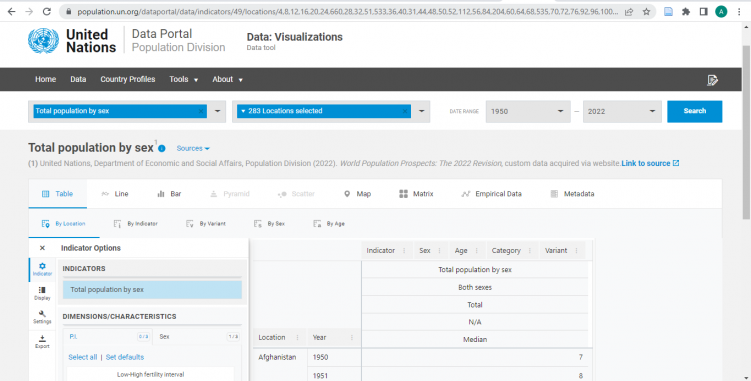 After checking that all countries and years are accounted for you may proceed importing the series via the normal process.

Every few years, we will update Land Area from the FAOSTAT page. On the Land Area page you will find different categorizations. Depending on the data task at hand you will do one of two things. 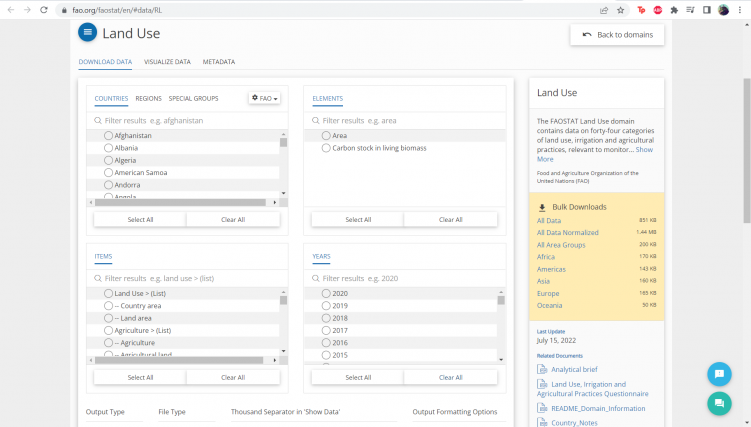 If you are asked to update the preprocessors or all of Land Area data, you can utilize the bulk download option on the right hand side. In Bulk Download, you will find all of FAOSTAT's land use data (including agriculture). In this case the most important thing to take note of is the country concordance! Make sure all countries have values and if they don't, fill forward from previous years.

Once you are done downloading and formatting the data you are ready to continue with normal pulling procedures!