The EconDash is a set of interactive data visualizations created by the Frederick S. Pardee Center for International Futures. The purpose of these visualizations is to allow the user to explore and better understand relevant indicators of financial and economic instability and resilience. EconDash uses both monadic and dyadic data across time, and includes some forecasted variables from the International Futures (IFs) system. There is currently one public user interface available from EconDash that explores Trade Networks. A new Economic Vulnerability interface will be available by late summer 2017.

This dashboard focuses on trade networks from 1960 to 2014 and the centrality of countries in these networks. It also contains data on financial crises over the same time period. To access the dashboard click here.

The EconDash interface allows users to display and explore financial and economic crises and global trade networks along a variety of dimensions. Figure 1 is an 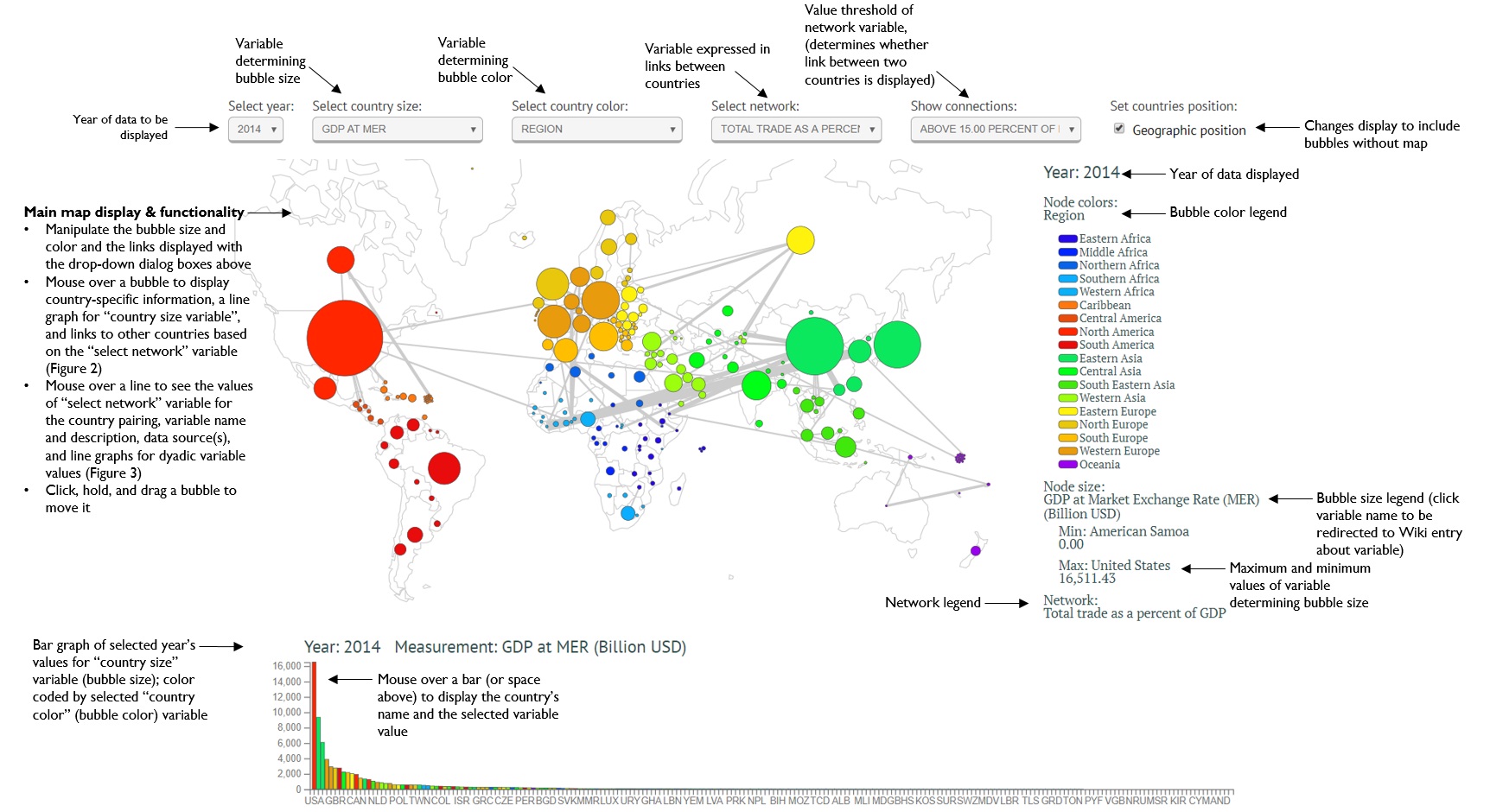 annotated view of the main display page with its default settings. It provides definitions and instructions on each of the page's functions. On this page, the user can select the independent variables that determine: 1) the size of the bubbles that represent each country ("Select country size"); 2) the bubbles' color scheme ("Select country color"); 3) the network that is represented by the links (grey lines) between countries ("Select network"); and 4) the value threshold over which network links should be displayed for the selected network variable ("Show connections"). One can also select the year of the data that will be displayed ("Select year"). Currently, data is available from 1960 to 2014. In addition, the interface provides information about the selected independent variables in the textual display on the right and in graphs at the bottom of the screen. One can access country-specific information about 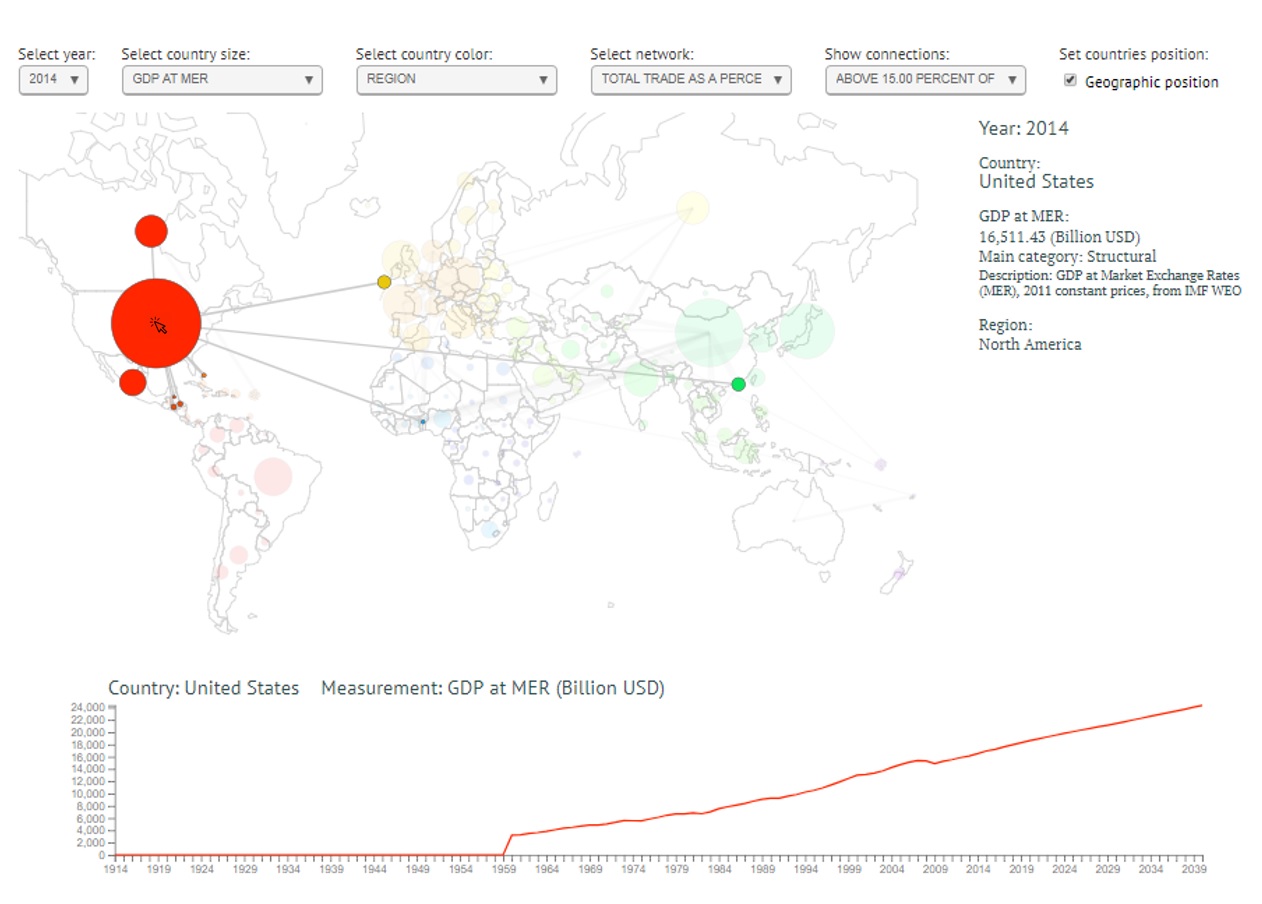 selected variables by mousing over each country bubble (see Figure 2). Information about the network variable for two countries (country dyads) can be viewed by mousing over the grey line linking them (see Figure 3). Generally, the most meaningful stories emerge when two or more of the selected variables represents the same category of information. For example, one could gain a better understanding of the world's energy trade networks and how they relate to economic sophisitaction (as measured by GDP per capita) by selecting "GDPPCP" for country size, "centrality score energy" for country color, "total energy trade" for network, and experimenting with connection thresholds.

Say you want to better understand the occurrence and movement of financial crises across time. Select "GDP at MER" for the country 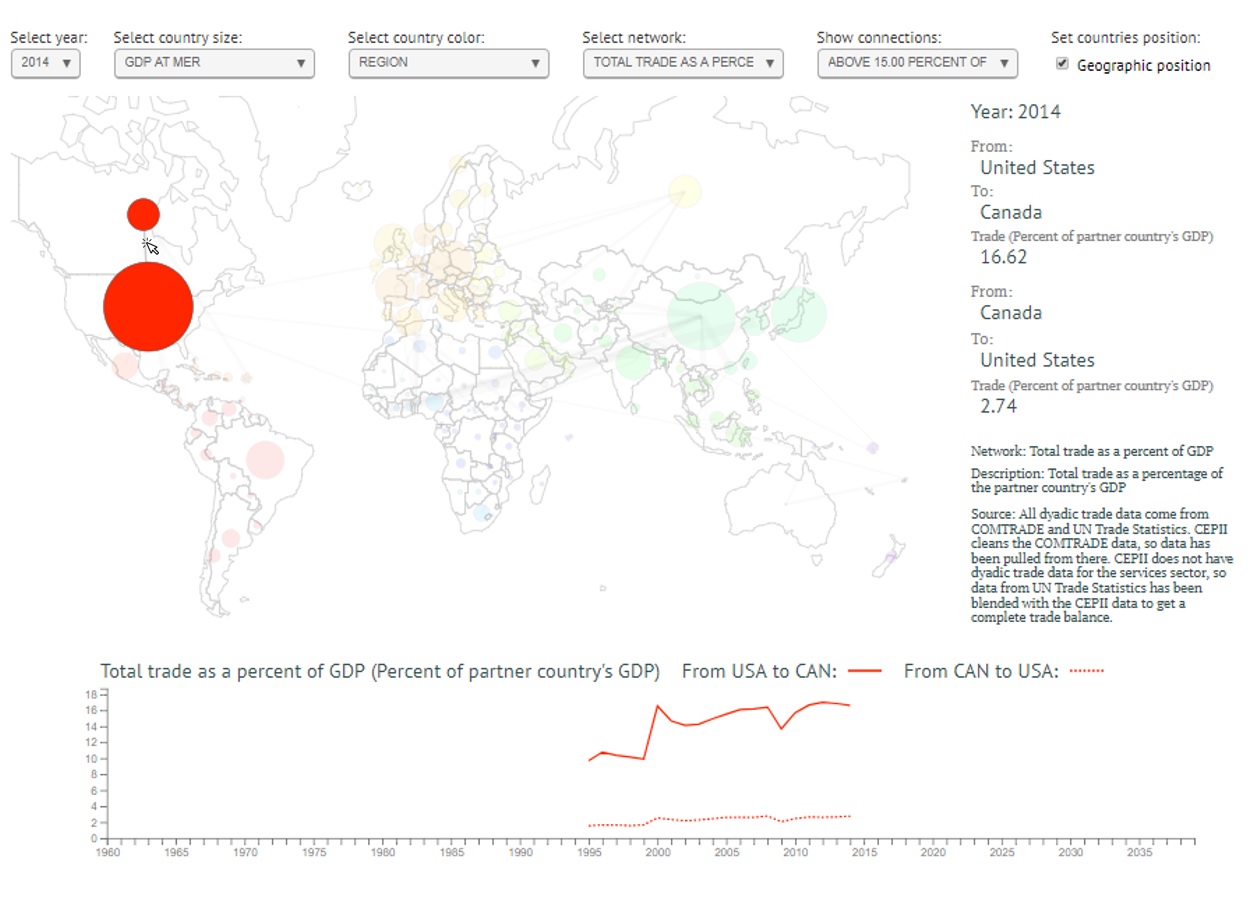 size, "Financial Crisis (Binary)" for the country color and "Total Trade" for the network. Then, select 1960 for the year, and (without clicking again) begin to scroll down though subsequent years using the down arrow key on your keyboard. In this way, you can quickly see which countries experienced a financial crisis in each year. Some patterns you may notice are:

- When countries with large economies are involved in a crisis, it can affect a region and/or trading partners in subsequent years; this cascading effect can be seen in the map view and in the bar graph displayed at the bottom of the page (e.g. Asian financial crisis with Japan as the epicenter in 1996 and 1997 and the Global Financial Crisis with the US and UK as epicenters in 2007-2009)

The different categories of relevant indicators are listed below, with a justification for their inclusion in the EconDash visualization.

The dependent variable is defined as an economic crisis that occurs as a result of strictly economic phenomena. This excludes economic instability resulting from political instability or natural disasters. Economic crises are classified according to the following IMF data.

Financial crises are analyzed as binary variables from the IMF's banking crises database. They observe the occurence of any one of the following types of financial crises:

2) Significant banking policy intervention measures in response to significant losses in the banking system. The first year that both conditions are satisfied is considered the onset year.

The second condition can be met when three of the following six policy intervention measures have been implemented:

Outside of these criteria, a crisis can be deemed systemic if 1) a country’s banking system exhibits significant losses resulting in a share of nonperforming loans above 20 percent, or bank closures of at least 20 percent of banking system assets; or 2) fiscal restructuring costs of the banking sector are sufficiently high exceeding 5 percent of GDP.

Currency crises occur when the national currency experiences a nominal depreciation of the currency against the U.S. dollar of at least 30 percent and is also at least 10 percentage points greater than the rate of depreciation in the year before. The authors use the bilateral dollar exchange rate from the World Economic Outlook database from the IMF. In cases where countries meet the currency criteria for several continuous years, the authors use the first year of each 5-year window to identify the crisis. Using this approach the authors identify 218 currency crises from 1970 to 2011, of which, 10 occur from 2008 to 2011.

Sovereign debt crises occur when countries default on their sovereign debt to private creditors. The authors identify 66 sovereign debt crises using data taken from a Beim and Calomiris 2001 paper, the World Bank, a Sturzenegger and Zettelmeyer 2006 paper, IMF staff reports, and reports from rating agencies. Similarly, the year of debt restructuring is the year a country restructures their debt. It is possible to have multiple crises and debt restructurings in a single year, see Greece 2012. [1]

Monadic data are those that describe one country in a single year with a structure of country-year. For example, Senegal's GDP per capita at PPP in 2012. In the EconDash's Trade Networks visualization, monadic variables include all Dependent Variables (i.e. crises), Structural Variables (i.e. economic statistics) and Financial Variables (i.e.centrality scores). While centrality scores are calculated based on a country's trade relationships with other countries (nodes) in the global network, countries receive a single, annual centrality score for each trade sector.

Dyadic data are those that describe the relationship between two countries in a single year with a structure of country-country-year. For example, total ICT trade between the US and China in 2015. In the EconDash's Trade Networks visualization, dyadic variables include all Network Variables (i.e. abosolute and relative levels of trade). The dyadic trade data is used to analyze bilateral trade levels between countries in the following sectors. Each sector is analyzed as percent of partner country's GDP as well as total intrasector trade in millions of US dollars: 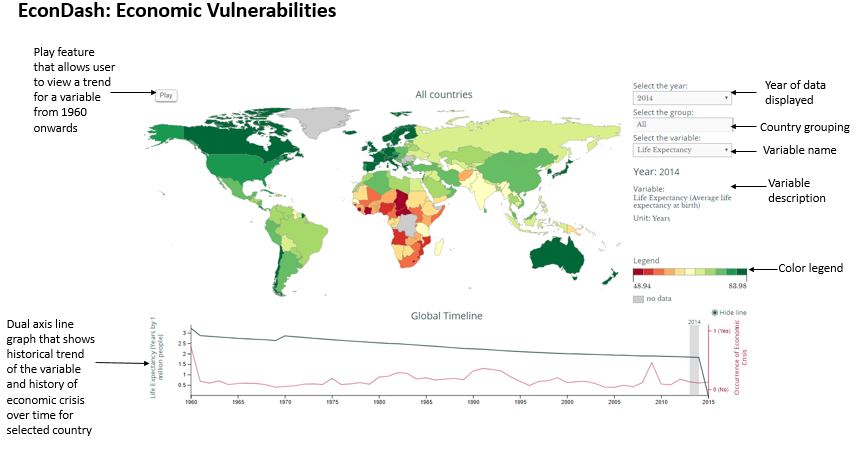 Figure 4: Economic Vulnerabilities Interface (with description of all features)

The interface enables the user to view and analyze various independent variables across countries across time. The dashboard presents a world map populated with a relevant variable in a particular year. The variable is color scaled and a “valence” has been defined for each variable. For example, the demographic dividend moves from red to green (lowest to highest), whereas infant mortality moves from green to red (lowest value to highest value). There are three filters at the top right of the visualization that allow the user to select a relevant year, a relevant variable or indicator and a particular country group. The dashboard allows the user to play a particular variable over time so that the unfolding trend can be analyzed visually across countries.

Below the map visualization, the user can see a line/bar graph describing the trend of the variable for the world as a whole over time. When a user hovers over a particular country, this line/bar graph describes the trend for the country instead of the world as a whole over time. Also note that this graph will show the trend over the entire time horizon even when the filter above is set to a particular year. This enables the user to understand the overall trend before selecting a particular country.

Under the line graph, the user can see what group a particular variable belongs to. For example, the variable demographic dividend belongs to the group ‘Demographic Vulnerabilities’.

Finally, in order to better understand vulnerability to crises, the dashboard helps the user analyze the same not just across countries but also across “groups” of countries. The basis of these groups include factors such as income levels, development levels, geographic region, exchange rate regime etc. The filter above the map visualization has an option for selection of country groups. This enables the user to see a cluster of countries and the variables for the same.

Figure 4 shows the interface along with all of its basic features. The country grouping function has been described in detail in the sections below.

The dependent variable (DV) was for the purpose of the second visualization was calculated on the basis of the percent change in the GDP at MER. The following steps were followed in the computation of the DV,

First, the percent change in GDP at MER was calculated from 1960 onwards using historical data and forecasts from IFs. A threshold was set for the DV, namely, where the change in the growth rate was lesser than -4%. A binary variable was computed i.e. the value in a particular year for a particular country was set to 1 where an economic crisis was said to occur, if the threshold was met.

The variable “Occurrence of Economic Crisis” that appears in the visualization is a combination of these three dependent variables. 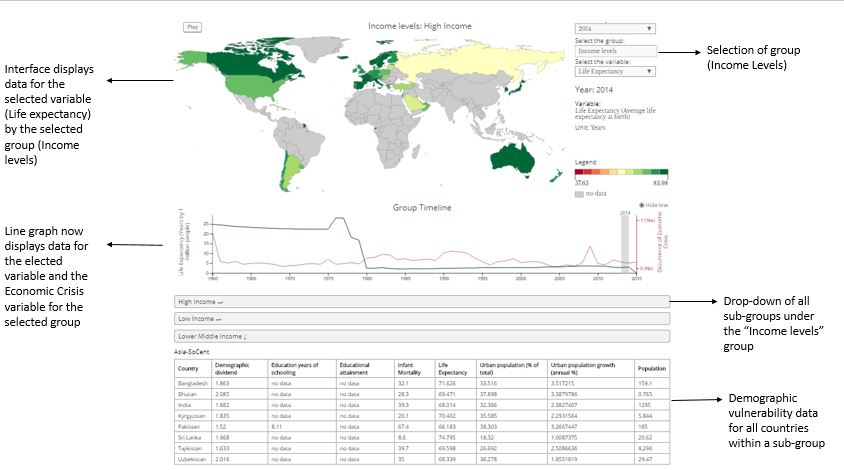 Figure 5: Display of the grouping function in the interface along with description of all components

To better understand what drives economic crises, the visualization also gives the user the option to view the occurrence of crises across groups of countries in addition to individual countries. These groups were developed using specific criteria such as fuel imports, exchange rate regimes, levels of development etc. The user can currently select from up to 8 groups of countries with various sub-groups. The main groups are,

Figure 5 shows the country grouping function in the interface.